The humble potato (Solanum tuberosum) has its origins in the Andes of South America where it first cultivated by the Inca civilisation some 8000 years ago. It is widely believed to have been brought back  to Spain by the conquering conquistadors circa 1536. In fact, the word 'potato'  known in Spain as  'patata' derives from 'batata'. The potato was first grown in England in 1597 and later spread to Ireland and Scotland.

One of the first promoters of the potato in France was Antoine-August Parmentier who was an Inspector General of Health under Napoleon. He successfully brought the humble potatoes attention to Louis XVI of France in 1787 which help raise its profile from animal feed to an edible nutritious food source.

In Ireland the potato was introduced as a garden vegetable of the gentry, it gradually became a supplementary food source to grain. During the industrial revolution though  its popularity as a cheap, nutritious food source grew rapidly and by the early 1800s it had become the staple diet of over one third of the population in Ireland.

This led to devastating results for the population when the crop failed due to potato blight, resulting in a million people dying of starvation and the same number again emigrating during what are known as the famine years. 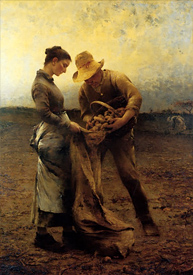